So, decided to start running some fleets and get practiced at FCing. End result is I don't know what I'm doing. Well, not completely clueless because I have been in fleets for a couple years now and been watching what others do but it is hard to appreciate everything that goes into FCing until you are the one doing it.

Last night we took some thrashers out and baited a Dramiel. Then we got baited a few times and went home ISK positive. Tonight was not as great. Took out some Caracals and found an obvious bait vindi. Went as well as expected.

But I'm having fun. And hopefully our guys are too. If you see me out there come fight.
Posted by Orson Brawl at 7:52 PM No comments:

Pulling the trigger. See you all there.
Posted by Orson Brawl at 12:08 PM No comments:

Have the recurring opportunities gotten people into space and driven conflict? I'm not sure about others but it has for me. There have already been a few encounters with other WH dwellers that were hunting or avoiding being hunted that I would not have interacted with if I had not been traversing our chain to get that sweet sweet 10k sp. They haven't lead to kills but they have lead to bits of excitement.

In one case the site running Raven I tackled jumped the hole and when I followed he was with 4 more of his brethren and so I noped out in my lone svipul.

In another case I found Exit Strategy camping my way back in and got to evade bubbles and people trying to decloak the Endurance my indy alt uses to kill belt rats for the daily.

In many more cases I log in to kill the rats for the bonus sp and end up talking to and doing stuff with my alliance mates. It's pretty easy to sucked in even if you logged on with the intention to only play the few minutes to get the daily done.

I don't know if my experience is representative of the eve population as a whole but I can't be the only person this is working for either.
Posted by Orson Brawl at 11:35 AM No comments:

Roaming in the Warzone

We took out a kitchen sink shield cruiser fleet this week. I use the term cruiser fleet somewhat loosely since one of the alliance mates decided to bring a "flagship" in the form of a Machariel he bought that day. I decided to dual box and bring a Sabre and a Caracal.

We formed up in Solitude and started to make our through Syndicate heading towards Cloud Ring. My Sabre did plus one duties since I had warp speed rigs and could bubble up and catch things ahead of the fleet. A couple jumps out I found an VNI using anchored bubbles to catch people. He starts to move out of the bubbles and I quickly tackle him and call for the fleet to come in. Unfortunately, his drones hit pretty hard and I go down just before logi can get reps on me after landing. RIP Sabre.

I head back to reship as the fleet pushes on. I catch up and we finally get into cloud ring and try and catch some miners and ratters but they POSed instead of warping to the now bubbled station. We press on and on the other side of the gate we find a smallish camp. Similar sized to ours but mostly T1 cruisers to our 50/50 mix of T1s and HACs. I bubble up their fleet and jump back through the gate and bubble that side as well while also following targets on my Caracal. A rupture comes over and starts to plink at my Sabre.  So I come back through and refresh the bubble before haviong to bail again. We're doing well taking down a trio of Arbitrators and a Vexor when I see a Barghest landing with a couple HACs. I start to call out contact when I then see a 40 man Svipul fleet belonging to the Culture landing in my bubble.

I call out what I see and the FC calls to disengage the fleet. Most of our guys make it out but the Flagship Machariel is tackled by the first fleet and goes down swinging against many many tactical destroyers. During this time my Sabre gets infinite pointed by an Onyx and I try my best to shake him but finally the Svipuls come back to finish my 2nd Sabre off. I might have been able to slip away if I wasn't splitting my attention and getting my Caracal off field.

We then extract the going long way home in order to not get in between the Svipul fleet and whatever onjective they were going for. All in all it was a good day. We won some and lost some and our Mach pilot had a blast even if that ship didn't last as long as he had wished it would.
Posted by Orson Brawl at 10:15 PM No comments:

The Process is the Point

I've found out in the nearly two years I have been playing eve that I find planing to be more fun than the execution of the idea. I love coming up with a goal and taking those steps to achieve it. Gathering supplies and setting up a base. Creating my own little own home wherever I happen to be at the time. That might be in low sec or a wormhole or in my current case Solitude.

So, that is what I am doing now. Gathering my ships and POS modules for an extended stay in the far reaches of the Gallente Federation. We've caught yet another wardec which has put a damper on starting up my industrial operations but I do have my JF pilot out of corp so I can still do that leg work while putting the mining operations on hold. My little plan is a bit more ambitious than past plans but I should be able to work on it at my own pace while still joining with alliance ops in the region. So, bit potential things in the future but right now I'm enjoying putting everything in place.
Posted by Orson Brawl at 9:42 PM No comments:

So, I have started to move into our new home in Solitude. We're not abandoning our WH but we're doing more content and more roams and such in k-space.

Overall, Solitude is an odd place. It is a high sec island but logistically it operates like npc null or deep low sec since it is seperated from the rest of Gallente space. To this end I bought an Anshar jump freighter.

I have found having my own JF is really useful but also terrifying to fly. A 7+bil investment is not something you really want to lose from a silly mistake. So, I double and triple check the situation before undocking and making a jump to my next system.

It's odd that flying a transport ship in EvE can give me bigger shakes than any other game.
Posted by Orson Brawl at 9:12 AM No comments:

Our wormhole chain opened up to Canard last night, Being just three jumps from New Eden and the Eve Gate I decided to go see it for myself since I had never been. There is a sort of quiet solemnity there. Many people before me have dropped cans. Some are advertisements. Some mementos. Some are messages to lost love ones. I found it very touching and a bit sad. 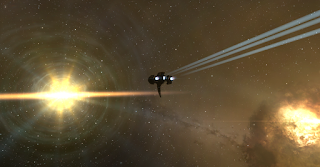 Posted by Orson Brawl at 8:24 PM No comments: